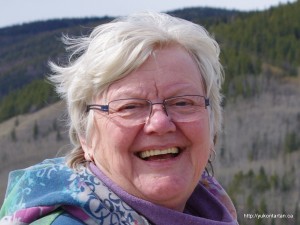 My first visit to the North was in 1998 when we visited two of our children who were doing research at the Arctic Institute in Kluane.  My husband and I immediately developed a deep affection for this incredible land.  After teaching Family Studies for over thirty years, I retired to Yukon Territory from Atlantic Canada.

Tartan has always been a special part of my life.   I grew up in Nova Scotia surrounded by farms, apple orchards, rivers and tartan.  Nova Scotia, Cape Breton, Black Watch and Air Force Tartan were all in ample supply.  4H introduced me to sewing.  In 1967, I made my first tartan product, a kilt from Canada’s national Maple Leaf Tartan.

I am a graduate of NS Teachers College and Mt ST Vincent University, have four children and six grandchildren.  My husband Dave and I live in Whitehorse.

What began as an afternoon’s work to make a few items from Yukon Tartan to send to tartan lovers back in Eastern Canada has grown into a hobby bordering on obsession.  My husband compares it to my bread making, like yeast it keeps growing and growing. Photos of some of the items I create can be found in the Yukon Products section.

During my search to learn about Yukon Tartan it has been my privilege to met many creative Yukoners, including Janet Couture and Diane Parenti.  Janet is to be commended, not only for designing the fabric, but for the nearly twenty years she spent persisting to have it registered as a tartan in Scotland and adopted by the Yukon Legislature.  It took nearly another twenty years (Jan, 2014) before Janet and Diane finally met.  Diane had used her weaving skills to produce the sample that was finally accepted by Her Majesty’s Registrar in Edinburgh Scotland.